Repeat after me: “Dr. Larry Biddle, The Godfather of Renaissance, shakes it up at West Potomac HS.”

Posted by Jason@Jostens on January 7, 2016
Posted in: Uncategorized. Leave a comment

The Godfather of Jostens Renaissance made himself heard in Northern Virginia on December 4th, 2015. Approximately 100+ administrators and Renaissance “staffulty” teams from around the region came to hear Larry Biddle roar, shake up and get people movin and shakin’. All for good reasons.   For more about Larry and his efforts with Renaissnce over the years, check this out:
https://www.jostensrenaissance.com/welcome-to-the-new-jostens-renaissance-education/ (@J_Renaissance)

Hosted by the always energetic Alex Case and (the World’s Best High School) West Potomac HS, The Jostens Renaissance Mid Atlantic Collaborative delivered once again inspiring message for all to take back to their schools for 2016 and beyond.

The spring JR-MAC is set for Pocahontas Middle School in May 2016.

The Power of Penman. Teamwork exemplified in literary arts magazine.

Posted by Jason@Jostens on January 7, 2016
Posted in: Uncategorized. Leave a comment

This is Sarah Congable’s second Savedge Award. During the second cycle, Cat Misar took over advising and continued to earn Trophy Awards with her Penman publications teams since 2011.

Jostens is the official commemorative partner with the VHSL and provides the champ rings to publications advisers in the state of Virginia. The adviser’s rings include the school name, publication’s name and stone color of choice.

Jostens publishes the winter and spring issue of the Penman. The staff utilizes Jostens’ award winning publishing platform, YearTech Online to conveniently produce each issue of the literary arts magazine. 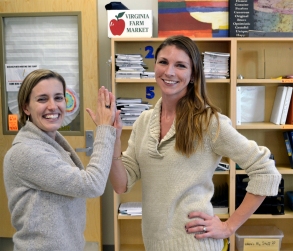